Finepart | How it works | The function principle ...

The function principle of the micro abrasive waterjet.

The principle of the micro abrasive waterjet cutting head is described schematically in the illustration to the right. The main parts of the cutting head are a straight inlet tube that stabilizes the stream of incoming pressurized water, a primary nozzle or orifice, a mixing chamber with a feeding port for abrasives, and a mixing tube or focusing tube. The waterjet formed in the orifice is gradually broken up into small drops moving at high velocity through the cutting head.  In the mixing chamber, these drops strike the abrasive particles (usually garnet grit) which are fed into the cutting head and an energy transfer accelerate them to high speeds.

Abrasives and water are then focused to form a fine particle stream in the mixing tube. The micro abrasive waterjet is a stream of particles without any real core of water. By volume the mixture is ca 4 % water, 1 % abrasive and the rest are air. It is highly critical that both nozzles should be aligned to avoid losing power in the process. The method extends the same equipment as that used for pure waterjet cutting, with the addition of an abrasive feeder and a cutting head.

The erosive power of an abrasive water jet makes it considerably more powerful than a water-only jet. The diameter of the particle beam, and thus the width of the cut, is established by the diameter of the focusing tube, which is usually about 0.2 – 0.3 mm for the micro abrasive waterjets of today, although dimensions as small as 0.05 mm has been tested experimentally. The cutting result depends on a large number of parameters that influence both power supply and efficiency, which in their turn determine cutting speed and cut quality. Much of the skill of the operator lies in his or her ability to understand and to master these parameters and the resulting cut quality. 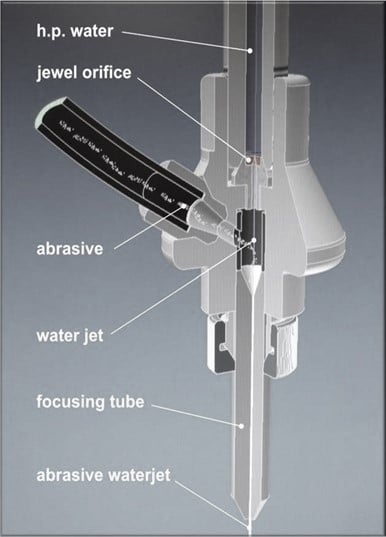 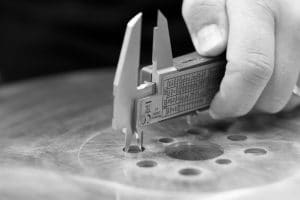 With appropriate selection of cutting speed and parameter settings, the abrasive waterjet process can produce parts with a choice of cut surfaces that ranges from rough separating cuts to precise taper-free cuts. An industrial praxis for cut quality classification has become widely accepted among abrasive waterjet systems manufacturers and operators. Although this may vary slightly among practitioners, cut quality is usually divided into five classes ranging from an extra rough quality index, q = 1, to an extra fine quality index, q = 5. For micro abrasive waterjets these classes are extended to q=9 which represent a taper-free cut.

The finished part accuracy and cut quality that can be achieved with the abrasive waterjet cutting process depend on a combination of machine and motion control errors, to which is added errors related to workpiece stability (flatness, fixturing, temperature rise, movement due to residual stress release), process errors (the jet), and the influence of the material being cut.

How to obtain ultra high precision?

The precision of a machine tool is a matter of design and component quality and full utilization of it ultimately depends on the skills of the operator. Much can be done, both mechanically and in the machine control system to obtain good accuracy.

When designing the Finecut WMC500II machine, the above points has formed the design criteria. In the design of machine tools, the machine members are made to high tolerances. The control system has capability to compensate for remaining geometrical deviation. Therefor to obtain excellent positioning accuracy the machines are calibrated after assembly. Calibration is preceded by optimizing the servo parameters to obtain accurate motion. Then lasers are used to measure any geometrical errors, and the results are fed into the control. To further improve accuracy a volumetric compensation is performed. 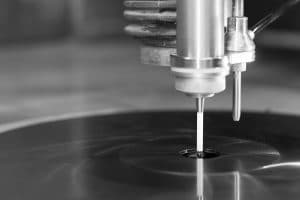 The technology giants have discovered Finepart